One of the most high profile divorce cases in the history of the UK encompassing a most serious conspiracy to defraud by judicial, insolvency office holders and lawyers who abused their positions of trust for financial gain. With all fingers pointing to the motive for murder, also being financially led, Mr Young died in highliy suspicious circumstances, the police covered it up. Widely publicised, it is believed that the murder of Mr Young is connected to that of his wealthy friends, who were all killed in similarly suspicious circumstances. Grant Thornton just so happened to be the trustee in Mr Berezovsky's bankruptcy, a co-incidence or something far more sinister?

Irrefutable documentation from Mr Young’s computer in 2008, a hugely successful entrepreneur, shows a total value of his asset portfolio in excess of £800 million pounds. This however, was only a fraction of his true wealth, with the estate estimated to be valued at over £4 billion.

Mr Young concealed his vast wealth during divorce proceedings and he, along with his colleagues orchestrated his own bankruptcy, hiding assets in offshore entities to evade paying his wife half the true value of his estate.

Mr Young put his faith in the wrong parties

In summary of the case, Mr Young put his faith in the wrong parties. Stephen David Jones, a lawyer who was entrusted to assist Mr Young in concealing his wealth, had, we have reason to believe, colluded with David Ingram and Richard Hicken of Grant Thornton, with whom he had a long-established relationship going back to Mr Young’s telecommunications companies wherein they acted as auditors. Jones was jailed in August last year for defrauding a property investment company of over £10 million in an unrelated scam.

Ms Young was awarded a mere £26.6 million out of the vast estate, plus half of the value of the assets of Mr Young’s estate recovered by the bankruptcy trustees. The problem is, none of those assets were ever recovered, they appeared to "disappear" without a trace. Ms Young was very soon stripped of her judgment debt, a case of giving with one hand and taking back with another.

Insolvency was used to defraud

Fundamentally, the case is surprisingly simple. The later bankruptcy of Michelle was founded by a legal fiction, a fraud in conspiracy orchestrated by Ingram & Hicken, the joint trustees of Mr Young’s bankruptcy wherein they sought, in breach of their fiduciary duty, to use insolvency law, with its principle function of recovering assets for creditors of insolvent estates, as a means of sequestrating Ms Young from her democratic rights as otherwise majority creditor of Mr Young’s estate. They went after the £26.6 million judgment in her favour.

"The regulators don’t regulate, the police don’t police and they all act merely as soldiers for the corrupt establishment to provide impunity to the corruptors, the parasitical infestation of lawyers in public office and in leadership positions"

The courts have been weaponised as places of injustice and human rights abuse, the judiciary are influenced by kleptocrats, the principles of natural justice are diminished, it has gone to the dogs along with impartiality and the rule of law. Let's face up to it, we have a third rate justice system ruinated by the establishment that makes third world justice systems far superior. It is not "world class", as the Lord Chief Justice implies, it is altogether lacking class and justice is a mere facade covering the gross injustice occuring within.

Let’s take a look at what’s going on, logic before law, in a few paragraphs

"The offenders are misusing the primary legislation that is designed principally to recover assets for creditors of insolvent estates (the Insolvency Rules 2016 / Insolvency Act 1986). This is happening on a widespread basis and in all of the cases investigated by Intelligence UK, the legislation is being used to take away one's standing. That standing being either democratic rights as a creditor, or the right of a claimant to further a cause of action in restitution for a wrongdoing. In other words, insolvency is being used to interfere with the proper administration of justice and the purpose of the legislation is being reverse engineered to do precisely the opposite of what it is intended to do"

In the case of Michelle Young, who was by far majority creditor with requisite majority voting interest, the Joint Trustees, Ingram and Hicken sought to take away her standing as majority creditor by amassing fees founded by predatory vexatious litigation. The Joint Trustees targeted Ms Young by seeking to challenge democratic right Ms Young already had to call a meeting to replace them. The court sought to wholehartedly support this, collusion was rather blatant. The alleged debt, founded by that principal fraud, a breach of fiduciary duty, was used to bankrupt Michelle so that they could defraud her of her asset, the £26.6 million judgment order and half of the assets recovered. One must naturally scrutinise their motive in doing so. It was certainly not because there were, as they allege, no assets recover. If that were the case, why would they be so dogged in retaining their position?

Refusal to disclose the assets, the cash in the bank accounts and any work purported to have been done in recovering the Scot Young assets remains the driver. Dishonest concealment is being advocated by the Insolvency Service, the Courts and the Joint Trustees, yet another grand scale cover up by the establishment.

The controlled media seek to blame the Russians, but in fact, the problem is much closer to home, lurking and rooted within our courts and central government themselves. 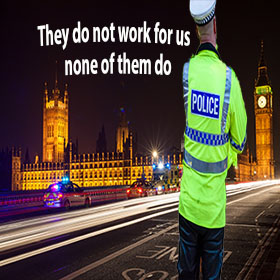 Corruption, fraud and human rights violations are accustomed in the UK

There is a hypocritical position wherein the establishment is overlooking the UK’s domestic systemic corruption within our justice system. Whilst they expend over £13 billion of taxpayer's funds on foreign aid each year, the UK’s systemic corruption problem spirals out of control whilst they conceal from the public what is really going on.

A massive increase in fraudulent activity and crimes against civilians is being concealed, advocated and overlooked.

Inspector Ian Younger of City of London Police, told us categorically that:

We are raising a fighting fund to take direct action against the perpetrators of domestic corruption. Payments are taken by debit or credit card quickly and securely, or you can donate directly with Paypal.

Corruption, fraud and human rights violations are accustomed in the UK

There is a hypocritical position wherein the establishment is overlooking the UK’s domestic systemic corruption within our justice system. Whilst they expend over £13 billion of taxpayer's funds on foreign aid each year, the UK’s systemic corruption problem spirals out of control whilst they conceal from the public what is really going on.

A massive increase in fraudulent activity and crimes against civilians is being concealed, advocated and overlooked.

Inspector Ian Younger of City of London Police, told us categorically that: